Tagged: Five Things About Me

I've been tagged by my husband, Rick (This Lamp ). According to Rick, being "tagged" is something common in the blogosphere. When you are "tagged," you are supposed to answer a certain question and then tag other people to do the same on their blogs. The task for this tagging is to list five things about me. Rick's list consisted of things most people wouldn't normally know about him, so I am taking his lead and doing the same thing.

1. I am a published writer. I've had feature articles published in Home Life magazine, The Courier-Journal (Louisville, KY's newspaper), and The Shreveport Times (Shreveport, LA's newspaper). 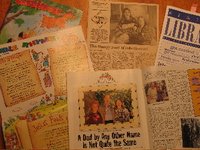 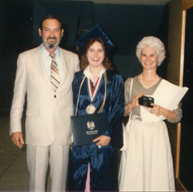 3. I do not have an elementary education degree or a degree in Library Science. Ironically, I have been an elementary school library media specialist for 16 years, was selected Library Media Specialist of the Year for Jefferson County, KY in 2002, regularly present at the annual state library conference, and have served as supervisor for 8 library practicum students (the library equivalent to student teaching). 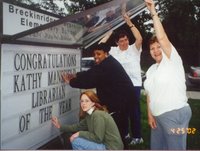 I DID earn a Bachelor of Arts degree in Social Studies Education (Library Science was my minor) in 1990 and a Master of Arts degree in Secondary Guidance Counseling in 1991. I AM certified as an elementary library media specialist by the State of KY, so my students and colleagues need not worry!

4. As a college student, I earned 14 scholarships and fellowships. I actually made money just by attending school! In fact, the down payment for our first house came from leftover scholarship money I won. One of my scholarships was from the Coors Beer Company, although I've never tasted Coors Beer. Another scholarship was from the Wal-Mart Foundation. I DO shop at Wal-Mart.

5. I was hit by a van during rush hour traffic near downtown Louisville while walking my dog, and I survived without major injury. In August, 2000, Bessie and I were out on our regular 7:00 a.m. morning walk, when a blue van came barreling around the corner of Payne Street and Baxter Avenue. The driver never saw us until right before he hit me. Bessie and I were in the crosswalk and had the right of way. The driver didn't use a turn signal, and he was busy talking to the passenger in the van. By the time I realized the driver didn't see me, it was too late to run. I turned toward the van with my arms outstretched (I guess to use my super strength to stop it), and the van hit me in the legs. When the driver slammed on the breaks, I bounced off the hood onto the road, hitting my head. Somewhere in the process I let go of the leash holding Bessie. I remember thinking, "This doesn't look like it hurts that much on TV, but in reality this hurts a lot!" The blow to my head knocked me out briefly. When I came to, cars were stopped all around me, and people were shouting at me to see if I was okay. I tried to get up, but all I could do was crawl to the curb. People gave me business cards saying they had seen the whole thing and knew it was the driver's fault. It seemed like only a few seconds before a police car arrived. Then an ambulance showed up. I kept going on and on about my dog. "Where's Bessie? I can't find my dog!" The policemen and ambulance people tried to calm me down. I was put on a special board to protect my neck and back. There was a palm sized knot growing larger and larger on the back of my head where I had hit the pavement. In the ambulance I ended up hyperventilating because I was so worried about Bessie. They had to give me oxygen to help me breath. I told the EMT my husband's phone number and also told him that my school needed to be notified because they would have to get a sub for me. It was the beginning of August and most schools in Jefferson County hadn't started, yet (I taught at a year-round school), so the EMT was very concerned that my head injury was quite severe. He kept reassuring me that school was not in session and that I really needed to try to relax.

Meanwhile, one of my best friends, Michele, was on her way to school that morning where we both taught. She heard on the radio that a pedestrian had been hit at the corner of Baxter and Payne Streets. Michele thought, "I hope that's not Kathy." Then she thought, "Kathy wouldn't even be up this early in the morning." Right about then, Michele looked out her car window and saw Bessie running down the road dragging her leash behind her. She knew immediately the pedestrian was me. Michele could see the flashing police and ambulance lights ahead, so she knew I was being taken care of. And she knew I would be worried sick about Bessie, so she decided to try to catch her. By the time Michele turned the car around, Bessie was holding up traffic in an intersection. A man was trying to coax her to the side of the road when Michele hollered from her car, "Does that dog's tag say Bessie Mae?" Michele managed to get the scared Bessie in her car and then drove her to school. By that time, the school had been notified that I was the pedestrian that had been struck (the accident happened just 3 blocks from school), and when Michele walked into the school with Bessie, she hollered, "I've got Bessie!" Bessie stayed in the Family Resource Center at school for most of the day. Staff members and students stopped by to love on her throughout the day.

Meanwhile, Rick during this whole time, was getting a haircut. He and the hairdresser heard on the radio that a pedestrian had been hit. Rick said, "I hope that's not Kathy. She's out walking Bessie." Right about then his phone rang. It was the EMT dispatcher calling to inform him that it was indeed me that had been hit and that I was on route to the hospital. Rick called the school, finished his haircut (that's a whole other story), then beat the ambulance to the hospital. As the ambulance doors opened, Rick shouted, "Bessie's okay!" (He knew that would be number one in my thoughts). Then he burst into tears.

I was X-rayed, prodded, and poked, but the doctors could find nothing wrong with me other than scratches and severe bruises. They kept calling colleagues to come in to see me and then announce the miracle that I had no broken bones or concussion. Rick said that instead, the pavement on Baxter Avenue was cracked from my hard head and we'd probably be getting a bill from the city soon.

I was only out of school for a few days, and the only lasting results from the accident are minor nerve damage in my right leg and a tendency for the leg to ache when the weather is about to get extremely cold. I was very, very lucky. And so was Bessie. I'm grateful to Michele for saving Bessie and to my school for taking care of her that day. Mostly, I'm grateful to be alive and to not have serious repercussions from the incident.

Bessie and I never crossed the street at the intersection of Payne and Baxter again.

On My Nightstand This Month 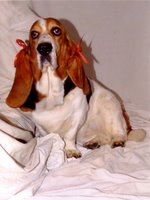 Our Basset Hound, Bessie Mae, is incredibly smart. Just today, for instance, she demonstrated her keen ability to outwit our house guest, Danny. Rick and I both warned Danny not to leave anything resembling food anywhere that Bessie could find. I also suggested he zip up his suitcase since Bessie has a fondness for just-packed socks. Upon returning from church today, I noticed immediately several torn scraps of plastic wrap scattered around the living room floor. I announced loudly, "Someone left food out!" Well, lo and behold, food was not actually left out in the open. Our brilliant basset used her impressive intellectual and olfactory abilities to locate a package of peanut butter crackers tucked "safely" away in a zipped up backpack of Danny's. Not only did our genius dog figure out that Danny had hidden peanut butter crackers just for her, she figured out which of the 4 zipped up compartments in the backpack contained the treat, and she worked diligently (as evidenced by the slobber on the backpack) to UNZIP the one and only section of the backpack containing the crackers.

Rick and I were quite proud. Bessie was generously rewarded with ear scratches and belly rubs. Danny, however, was scolded for tempting our beloved dog.
Posted by Unknown at 11:36 PM No comments: 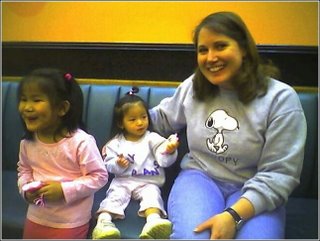 My school principal, Carla Breeding, has been encouraging Rick and me to practice being parents with her two little girls Carissa and Caroline. We finally tried things out a couple of weeks ago at Gattiland. Here's a picture of me with Carissa and Caroline. The three of us, along with Rick and Carla, had a great time. I even rode the ferris wheel with the girls! And most importantly, we didn't have to change any diapers.
Posted by Unknown at 9:55 PM No comments: 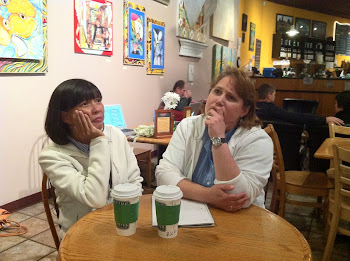 My Products at TeachersPayTeachers

My Favorite Blogs and Websites